All over the world artists choose to create directly on the walls, buildings and streets. This series is dedicated to those works of art that eventually get painted over. Generally this artform, graffiti aka street art is unappreciated and thought of as a disfiguration to the wall it’s placed upon.

Get Some Great George Clinton Graffiti Art For Your Pad

I’ve been fortunate to travel around Australia twice now. The first time was a sort of feel around and try out anything. Take advantage of every opportunity that presents itself. Now, I’m not saying that the second time you just coast and give up all goals. In fact just the opposite, since you’ve already had a smattering of options from the first time, now you can hone your targets on something a bit more specific. So in each port of call, you are making the absolute most of your time in the vibrant Land Down Under.

The second time we visited Fremantle or Freo as the locals like to call it, we heard about the main streets for shopping and eating like Market Street and Little Creatures Brewery on Mews Road. We spent quite a bit more time walking the side streets and checking out the fantastic free public art in the forms of statues (Bon Scott), paintings and murals (Horatio T. Birdbath). 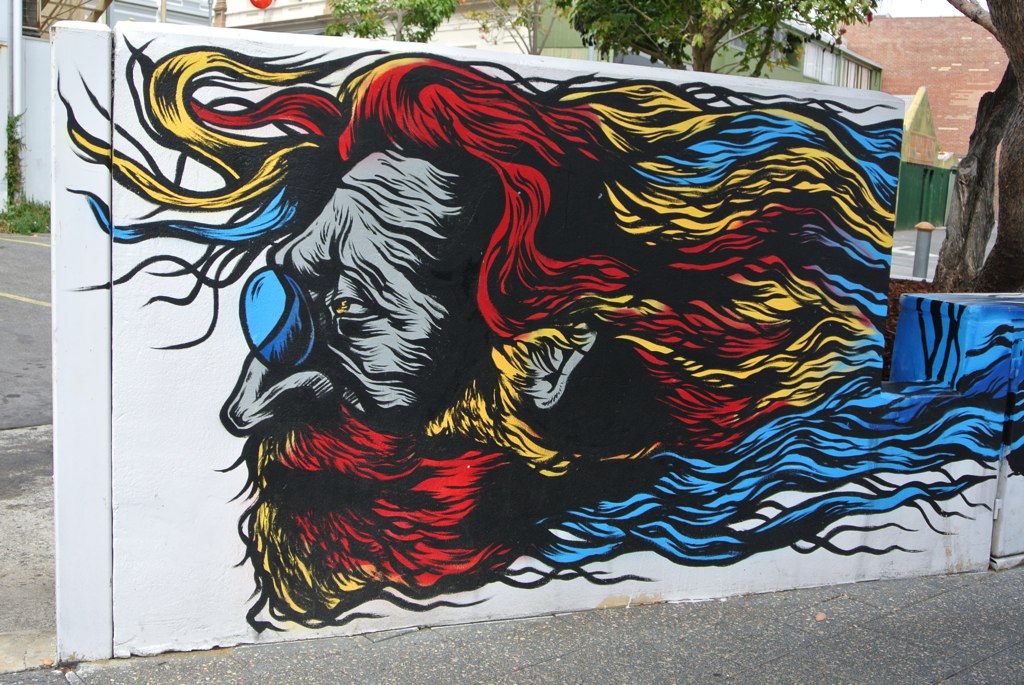 You see, we just wanted to get a little exercise and walk around the town. It has a really cool artsy bohemian vibe. In the park in the center of town, there was a fair. Well, atleast that day there was one. There was a breakfast juice cart with some dread locked hippies selling cold pressed watercress juices and some other varieties based on coconuts or carrots. They also made espresso and cappuccinos. My inner caffeine addict was super happy about that. Around the rest of the “fair”, there were some tents of people selling vintage clothing… or things that looked like they came from 1980’s era Mad Max. Other tents had leather goods and some folks were making lunch time snacks on portable bbq grills. Lots of folks just wandering around chatting it up and enjoying a beautiful day.

After we passed the park, we walked to the waterfront and followed it around to the marina side of town where Little Creatures Brewery is based. They have two buildings. Basically pole barns with really cool decor. One side is the actual brewery with the big silver vats of suds on display through glass. It has that notorious smell of curing hops and barley. They offer sampler size glasses, allowing a wee taste of their wide variety of beers in the garden out front. 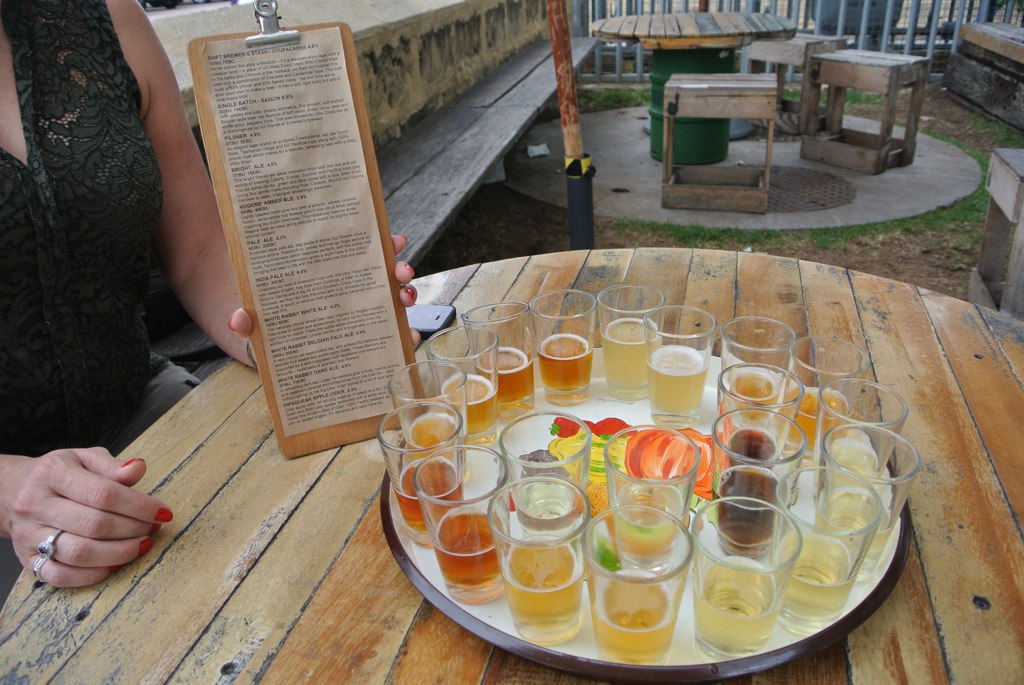 The other side of the building is the main restaurant. Long picnic style tables cross the main floor, huge order windows look into the kitchen that spans the length of the entire main floor. Plus second floor drinking seating area and also additional eating space outside on the pier overlooking the marina and ocean. It’s a wicked place to hang out with amazing pub style food. I recall our group tried almost all of the appetizers, had a pizza, some burgers, and ordered more food than we could consume. 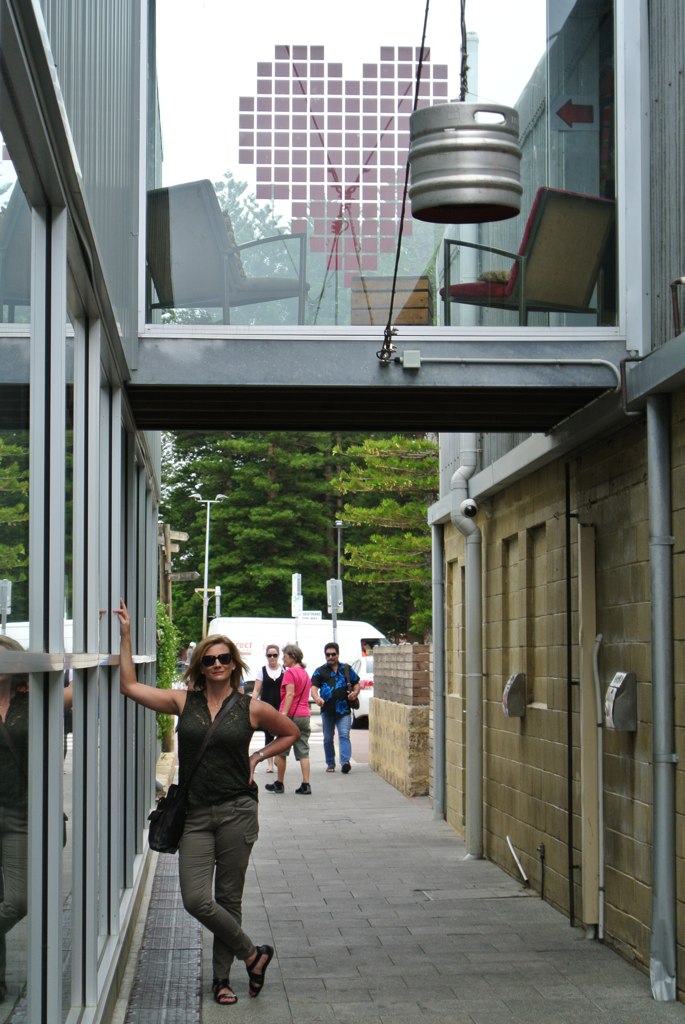 After our lunch, we wandered through yet another park and back into town. Across from the Freemantle Markets is a building with alot of personality. On one wall, there was a fantastically detailed mural with small intricate circles, squares, mazes and spaceship style architectural overtones. 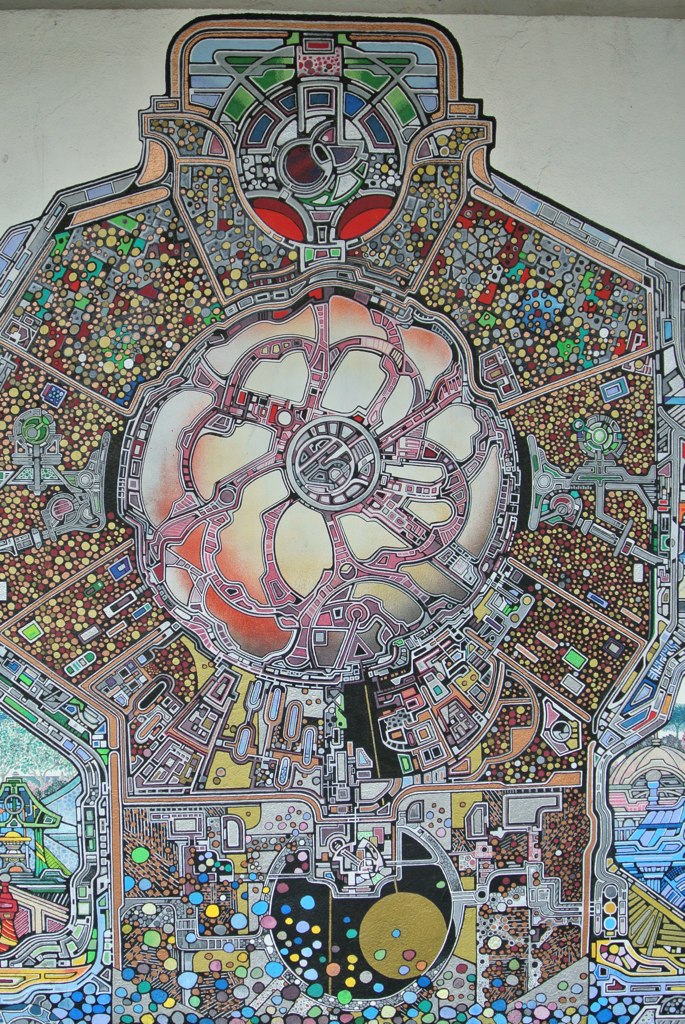 It’s like Horatio has seen the inside of a great machine that we are all just cogs in. On the other side of the planet in a land that is inhabited and yet deserted all at the same time, he’s drawn a map right on the side of the building. Who knows what direction it’s pointing?

Ever wonder exactly who he is calling on that little red telephone receiver? 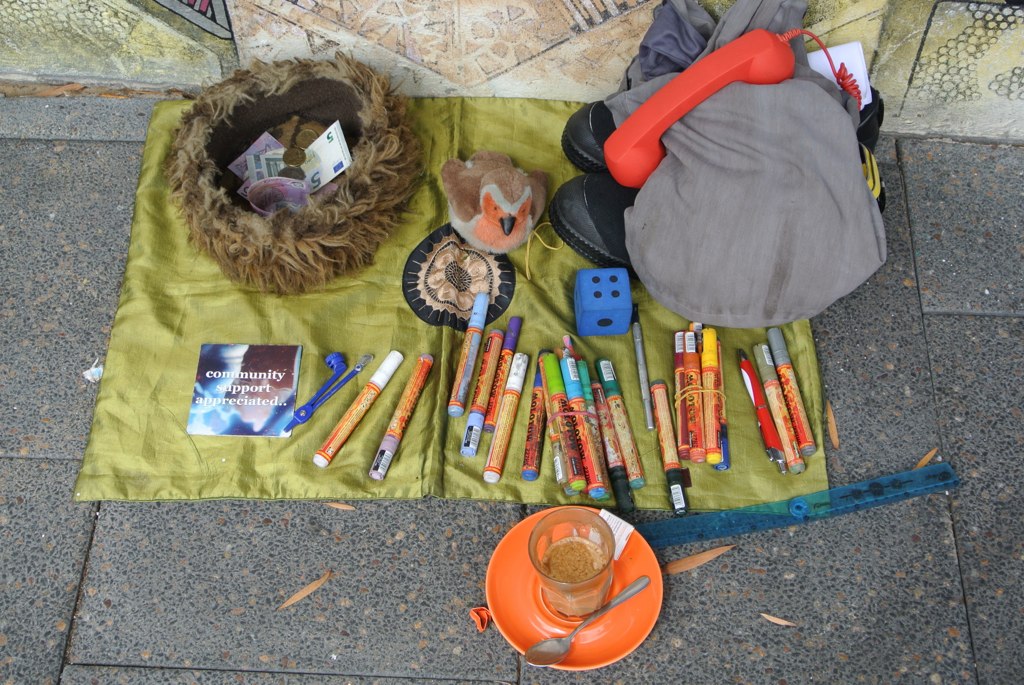 I chatted with Horatio for quite some time that afternoon. We discussed art, music, travel. We talked about inspiration and why people keep pursuing art. He’s an interesting bird with a free spirit and amazing talent. 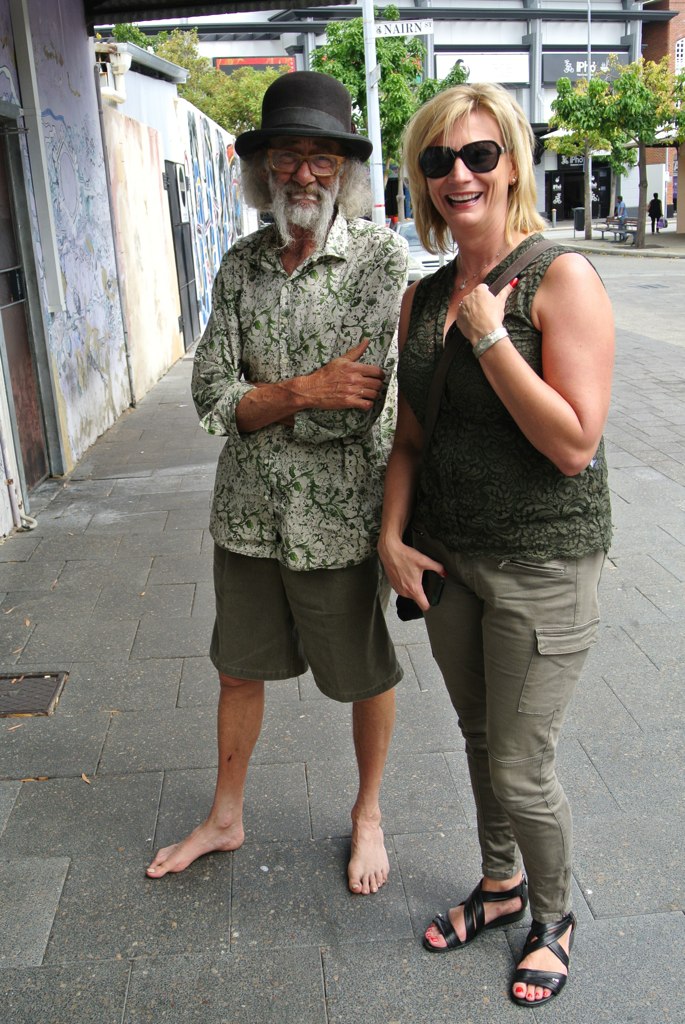 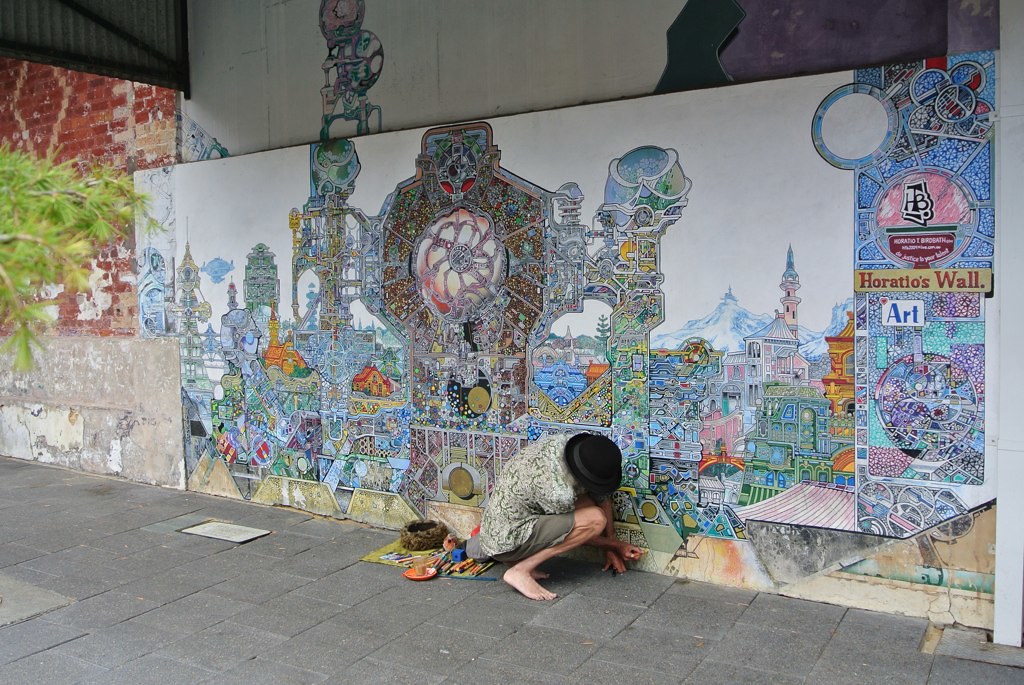 Sometimes I wonder what my true inspiration is, should be, has become, once was… “Do justice to your talent”, says Horatio T. Birdbath. Somehow I agree. Horatio insisted on taking our picture in front of his mural. He said something about being able to capture the true spirit reflected in our souls. 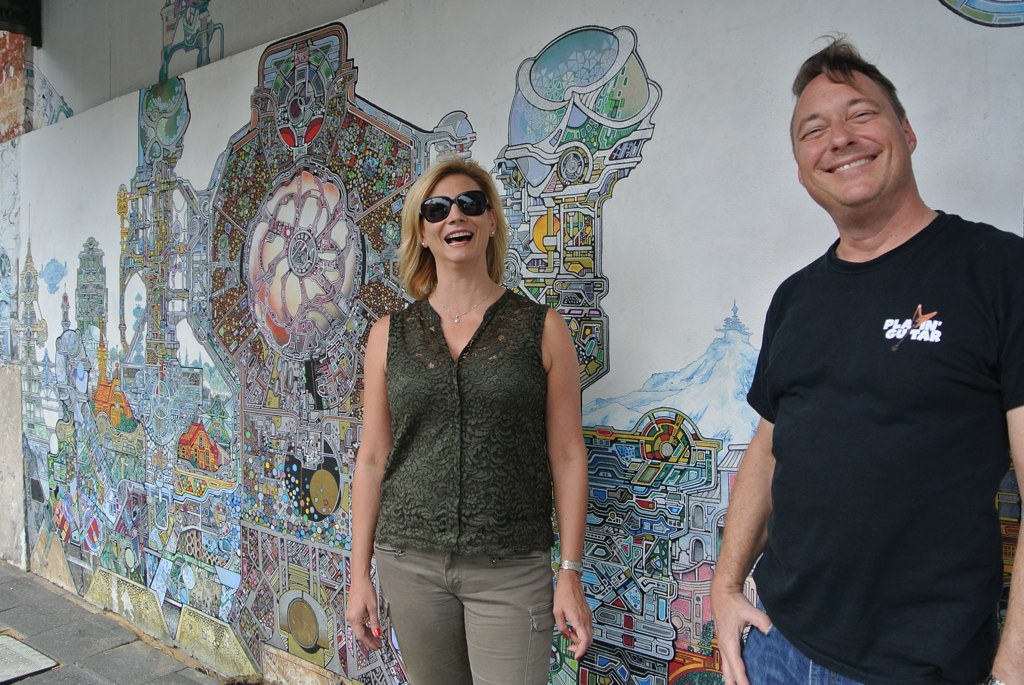 I love how the picture turned out. True happiness.

Jaw-dropping beauty at every turn

If you’re into art, architecture, the grandiose, history or interested in cultural exchange, a must do when visiting St. Petersburg Russia is spend a day or two traipsing the hallways, floors and corridors of the fantastic State Hermitage Museum. This grand palace commissioned for Catherine the Great during the peak of the Russian Czar leadership now houses some of the worlds greatest artistic treasures. They have rooms and rooms of art dating back to the Dark Ages and before. There are two rooms of Picasso, a huge room of Monet with some as large as the entire wall. They have Cezanne, Matisse, entire hallways of sculptures from the Greek Era.

I remember a long time ago now someone showed me a website that the Hermitage had built containing a small fraction of their great collection of fine art. I had no clue back then, daydreaming of putting my eyes to work interpreting such masterpieces in person that it would actually happen and that music would be the catalyst for it all.

Walking through the hallways and cavernous rooms, it is hard to imagine that this was once a private residence. Well, State – Ruler owned property, I guess you’d say. Either way, it would take warehouses full of furniture to make a dent in any of these rooms. Even then, heating this place has to be a hugely expensive undertaking. The funny thing about the price tag associated with the Hermitage is it’s free if you’re a Russian citizen and it’s only $5 or 6 US to get in depending on the exchange rate.

We really only had an afternoon of about 4 hours to take in the whole museum. I recommend either spending a good 6-8 hours at once trying to hit all the rooms and highlights… or buy the two or three day pass. That way you could go back to your hotel and rest up before dinner if you were to get too tired. For us, there’s no chance of that as we spend our days acting like tourists and then our evenings are dedicated to entertaining the passengers. Best of both worlds for us.